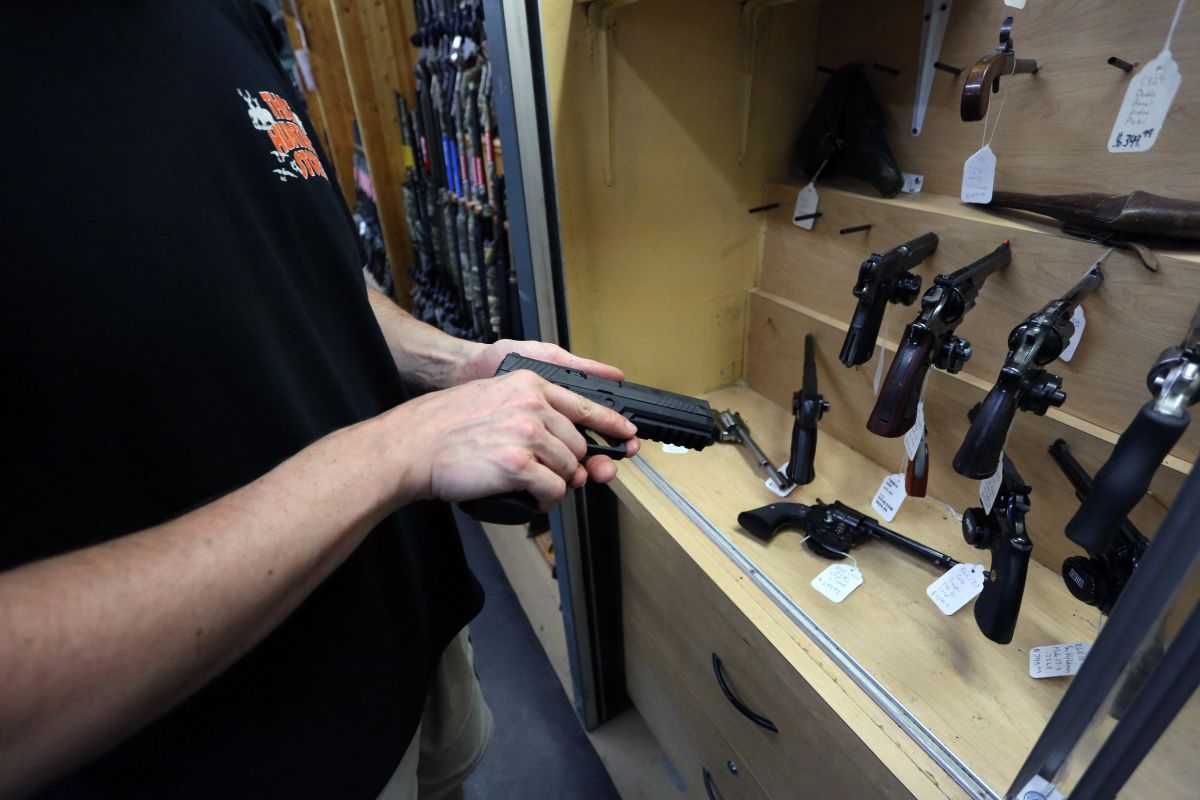 In the state of California, 48% of firearm homicide victims are of Latino origin, although this group represents just over 39% of the population of almost 40 million Californians.

Similarly, the largest minority in the state and nationally has experienced disproportionate rates of fatal shootings at the hands of law enforcement agencies. On average, it is estimated that about 200 Latinos are killed annually by a police weapon.

All these figures from the largest state in the nation, combined with figures at the national level, conclude that 11 Latinos die on average daily from firearms in the United States.

One of the most significant increases occurred in 2020 where 5,301 Latinos died from this cause.

It was a significant increase of 35%, compared to 2019, indicates a recent analysis of the Giffords Law Center to Prevent Gun Violence.

“More than surprising us, we are concerned that we talk about the fact that in 2020 alone there were 5,301 Hispanics killed by firearms, and in previous years the average was 4,000 or more,” Samantha Barrios, Florida state director for the Giffords Law Center.

“It has affected Hispanics/Latinos more than the rest of the population and this comes as a result of the fact that there are no adequate laws against the use of weapons,” added the spokeswoman for the legal center, previously known as the Legal Community Against Violence and the Legal Center to Prevent Armed Violence.

The report notes that, in recent years, high-profile and tragic incidents involving firearms against the Hispanic and Latino community have increased.

The most recent occurred on May 24 in the city of Uvalde, Texas -where four out of five residents are Latino– and where Salvador Gomez injured 38 people at Robb Elementary School. In one of the deadliest shootings in history, nineteen children plus two teachers were killed in the attack.

In 2019, Patrick Crusius, 21, a gunman killed 22 people at a Walmart in El Paso, Texas, claiming he intended to shoot against persons of Mexican nationality. The mass shooter was charged with 90 federal hate crime charges.

The Giffords Center analysis says that, based on 2010 data from the Centers for Disease Control and Prevention, on average, eleven people of Hispanic descent between 20 and 44 years old die daily from firearms.

In addition, it points out that almost half of the Latino youth that resides in one of the main cities of the United States lives less than a mile away from where a crime of homicide with a firearm occurred during the last year. And gun violence within the Hispanic community has been on the rise, with a 66% increase since 2014.

“There really will be a definitive answer if we believe in the bipartisan law that was just approved a few months ago by Congress and ratified by President Joe Biden,” Samantha Barrios considered. “It has been the only law passed in the last 30 years to keep us safe from gun damage”

Indeed, in June, the president signed a law that minimally restricts access to weapons, but not a ban on obtaining assault weapons, which would generally be for the exclusive use of the army.

The law includes an overhaul of the gun purchase process for those under 21, and allocates more funding for mental health and increased school safety.

Nearly one in five people living in the United States is Hispanic or Latino, making this community the second-largest ethnic group in the country, the Giffords Center analysis indicates, but deaths in this racial group have risen nearly double, compared to deaths by firearm in the country.

The report includes mortality data provided by the Center for Disease Control and Prevention (CDC), which classifies the concepts of race and ethnicity separately.

In fact, the data provided by the CDC is the most comprehensive source of information regarding firearms mortality; however, some data limitations may present important differences between particular Hispanic and Latino groups.

For example, Other mortality outcomes, such as cancer, see disparities by Hispanic subgroups, but data are not available to analyze disparities between deaths by firearms.

“The scope of this alarming and growing problem is critical to understanding the devastating effect of gun violence within the Hispanic and Latino community,” a spokesperson for the Giffords Center said in the report. “This community bears a disproportionate cost of this epidemic compared to other demographic groups in the country, and understanding this burden is essential to creating and implementing effective solutions.”

“We have to understand the problem in our language and that is why we hope that in the near future laws will be approved that protect us all,” he added. “We know that the law signed is not perfect, but we must work one day at a time to save more lives.”

African-American civil rights leader, Earl Ofari Hutchinsonpresident of the National Urban Policy Roundtable, reflected that the killing of Latino children in Uvalde, Texas, and the Walmart shooting in El Paso, Texas, “are murders that are symptomatic of two deadly trends in the United States.”

“One is the proliferation and ease of getting guns and the maniacal gun culture in America; the second is the relentless racist stereotyping and scapegoating of undocumented Mexican immigrants. Guns and racial hatred produced these massacres.”

The worst thing, he adds, “is that there may be more tragedies of this type.”

Hutchinson considered that only “tough legislation” for gun control can end the repetitive massacres and atrocities in the United States.

“ These measures alone will not stop all hate violence, but they send a strong message that the public and politicians take hate violence very seriously and are determined to confront it.

How can immigrants and Latinos specifically understand this gun violence in Hispanic and Latino communities? he was asked.

“Hispanic elected officials, educators, faith leaders, business leaders and community activists, and gang intervention organizations must do more to end gun violence within and among Hispanics, making it a major focus of its educational work and community participation. That includes forums, meetings, workshops in the community and schools, making at-risk youth the main focus of their efforts.”